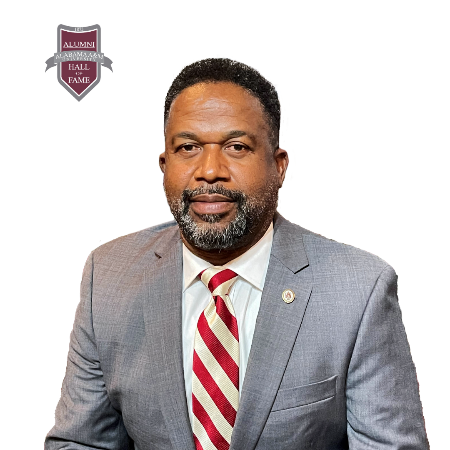 Mr. Michael Miller resides in Madison, Alabama. He is married to Mrs. Robin Y. Miller. He is the proud father of three sons:  Kelvin, Nicholas and Nigel.

Mr. Miller is a 1984 graduate of the Alabama A&M University with a B.S. degree in Electrical Engineering Technology, with a minor in Mathematics. He and his family are avid supporters of Alabama A & M, and have contributed over $100,000.00 to the university through various school and foundation initiatives, including initiating and financially supporting the Gamma Phi Clyde Mullins Endowed Scholarship, and the Kappa Alpha Psi Gamma Phi Endowed Scholarship. Because of his desire to make a lifelong impact on the university that gave him his “Start Here, Go Anywhere” his family initiated the Michael and Robin Miller Endowed Scholarship in 2019.  The scholarship will provide financial assistance to students majoring in Science, Technology, Engineering and Math.

Michael is a Life Member of the Alabama A&M Alumni Association where he currently serves on the Board of Directors, an active member of the Huntsville-Madison County A&M Alumni Chapter where he served as Fundraising Committee chairman.  He is the recipient of the 2020 Eloise Sterrs Award (award for an alumnus who is best able to bridge the gap between alumni and the student body at Alabama A&M University).  He is currently a member of the Alabama A&M Athletic Department Booster Club member, football season ticket holder and tailgater.

He started his career at Harris Corporation in Melbourne, Florida and was employed there for fifteen years. During that time, he held various positions in Systems Engineering and Program Management. Michael earned numerous engineering and program management awards as a result of his dedication to technical excellence and program execution.  He relocated back to Huntsville in the summer of 1999 with the MITRE Corporation (1999-2002) supporting the Army’s command, control and communications digitization initiatives.  He transitioned to the COLSA Corporation (2002-2006) in Huntsville to support the Missile Defense Agency’s Ground Based Midcourse Defense program.  In 2003, he fulfilled his lifelong dream and started his own company, MJT Integrated Systems Solutions, Inc. where he serves as President/CEO. The company provides systems engineering and program management support services to government agencies including the Army, the Missile Defense Agency, and the Federal Aviation Administration.  He currently provides full time contractor Systems Engineering and Program Management support services to the Missile Defense Agency’s C2BMC Program Office.

In his spare time, he enjoys traveling with his family, hunting, fishing, golfing, and cooking out for his social events. He enjoys meeting people and supporting worthy causes within the community.

Mr. Miller is a member of the Indian Creek P.B. Church where he served on the Kitchen Committee and New Members Ministry.