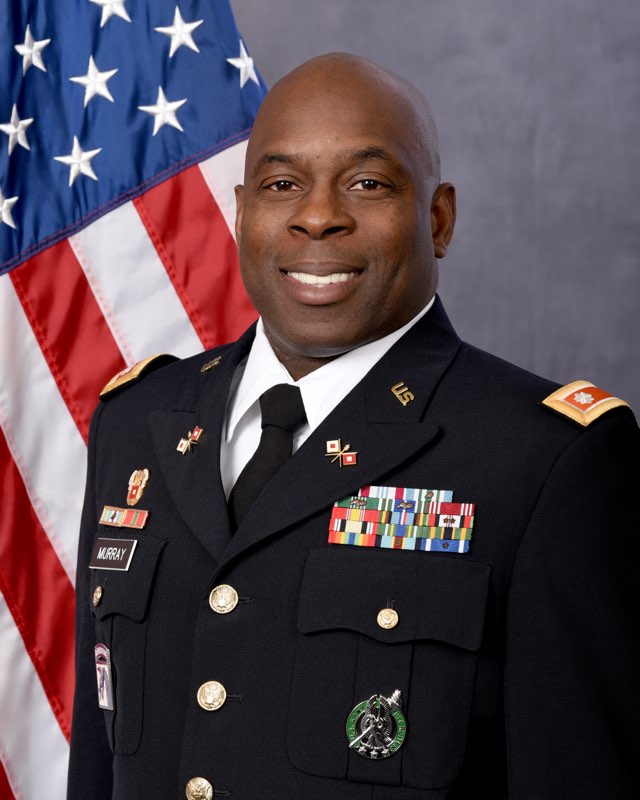 Lieutenant Colonel Dwayne Murray, a native of The Bronx, NY, enlisted in the Army as an information systems analyst (25B) after graduating from Syracuse University in 1997 with degrees in Sociology and Information Studies. He served in the 1st Signal Brigade, Republic of Korea and the Enlisted Records and Evaluation Center at FT Benjamin Harrison, IN prior to earning his Signal Corps commission from the United States Army Officer Candidate School in 1999. He earn a Master’s Degree in Management from the University of Phoenix. LTC Murray is a graduate of the Command and General Staff College, Combined Arms Services Staff School, Signal Officer Captain’s and Basic Courses, the Primary Leadership Development Course, Joint Cyber Operations Planner’s Course, and the Joint Targeting Course.

LTC Murray is married to the former Alison Jernigan of Severna Park, Md. She is 2001 graduate of the Syracuse University ROTC program an Army Nurse Corps Officer assigned to the San Antonio Army Medical Center. Team Murray has three boys – Dwayne, a freshman in college, Caleb 6 and Malachi 2.

MAJ Joseph Rucker is the Executive Officer and Assistant Professor of Military Science for the Bulldog Battalion. He hails from Lynchburg, VA, where he enlisted in the Army in 1998 as an Armor Crewman (19K). As a senior Non-Commissioned Officer (SFC), he graduated from Troy University in 2008, majoring in Criminal Justice, and later commissioned in 2009 as a Second Lieutenant in the branch of Military Intelligence. MAJ Rucker has served 23 years of Active Federal Service, and has enjoyed every day. MAJ Rucker is married to his wife Greta of Amarillo, TX and they have an 18-year-old daughter Ludhay, a freshman at Alabama A&M University. His goals for the Battalion include improving recruitment and retention through high school, college, and community outreach, while ensuring that every Cadet is afforded the opportunity to excel. His focus is making future officers, but also making outstanding citizens for society. His charge is to be an outstanding Leader, and to always, “Lift as We Climb” in every area. His favorite color is purple.

CPT Brubaker commissioned into the Quartermaster Corps from the ROTC program at Ball State University in Munice, Indiana in 2012. She attended the Basic Officer Leadership Course (BOLC) at Fort Lee, Virginia.  Following BOLC, she was stationed at Fort Stewart, Georgia where she served a MEDO, Platoon Leader and as a Company XO.  She deployed in 2014 with 226th CSC in support of Operation Enduring Freedom. After attending Combat Logistic Career Course in Fort Lee, VA she was stationed at Fort Campbell, Kentucky.  CPT Brubaker served on 3rd Brigade (Rakkasans) Staff for Operation Inherent Resolve 2016-2017 as a Logistics Advisor and a Gender Integration Advisor to the Afghan National Police. CPT Brubaker commanded both the Forward Support Company (FSC) and the Headquarters and Headquarters Company (HHC) of the 1st Battalion (Leader), 187th Infantry Regiment. CPT Brubaker enjoys travelling and spending time with loved ones. Her favorite color is Lavender.

CPT Loconte commissioned from the United States Military Academy (USMA) where he was a 4-year member of the varsity lacrosse team.  He commissioned into the Army as an infantry officer.  Following graduation, CPT Loconte attended the Basic Officer Leadership Course (BOLC) at Fort Benning, GA and completed Ranger School there as well.  He was then stationed at Fort Carson, Colorado where he served as a Rifle Platoon Leader.  During his time at Fort Carson, he was deployed to Kuwait and Syria.  CPT Loconte has been a member of the AAMU ROTC program since August, 2020. His favorite color is Infantry Blue.

1LT Morgan commissioned from the University of New Hampshire ROTC program.  A graduate of Saint Anselm College, NH where he was a 4-year member of the varsity football team.  He commissioned into the Army as a field artillery officer.  After graduation, 1LT Morgan attended the Basic Officer Leadership Course (BOLC) at Fort Sill, Oklahoma.  Following BOLC, 1LT Morgan was stationed at Fort Campbell, KY.  He has served as an Infantry Company Fire Support Officer, an Artillery Platoon Leader, and a Battery XO.  While serving at Fort Campbell, 1LT Morgan deployed to Cameroon. 1LT Morgan’s favorite color is Field Artillery Red.