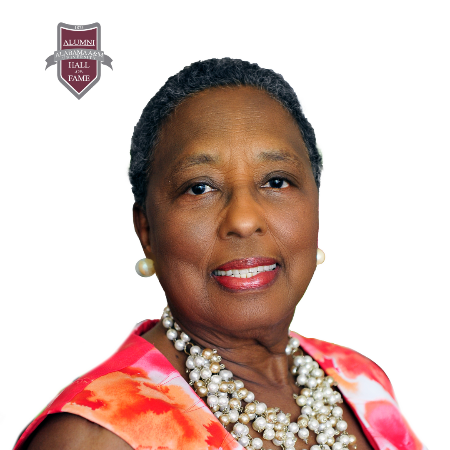 Dora L. Scruggs Washington, a native of Elkton, Tennessee, is the oldest of twelve children of Rev. Earl and Mrs. Georgia Scruggs. She grew up in Toney, Alabama, attended Toney High School and graduated from Councill Training School, Normal, Alabama.

Dr. Washington received the Bachelor of Science degree (English) from Alabama A and M College, the MA degree (Speech: Oral Interpretation) from Northwestern University, and the MA and Ph.D. degrees from Indiana University, Bloomington, in Speech-Language Pathology. A speech pathologist, she has served on both state and national committees in her profession as well as several educational and civic boards, including a member of the Board of Trustees, Rust College, and a member of the Southern Regional Council College Board. In addition, she has been active on committees in the United Methodist Church on local, state, regional, and global levels and in community and service organizations, including Alpha Kappa Alpha Sorority, Incorporated and The Links, Incorporated.  She is an active member of Aldersgate United Methodist Church and the Mississippi Chapter of the AAMU National Alumni Association.

Dr. Washington is a retired Vice President of Academic Affairs and Professor Emeritus of Speech and Communicative Disorders, Jackson State University, Jackson, Mississippi. She was a leader in developing both the Department of Speech Communications and the Department of Communicative Disorders. In addition, she served as the first Director of the Speech and Hearing Center. As Vice President of Academic Affairs, she was instrumental in establishing several new degree programs, including the MA in Communicative Disorders, the MA and Ph. D. in Urban and Regional Planning, the Ph.D. in Social Work, the Ph.D. in Business, the School of Social Work, the School of Allied Health (now Public Health), and the School of Engineering.