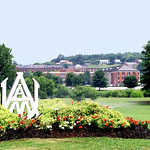 The Best of AAMU at a Glance!

2. In the last decade, Alabama A&M University has expended over $54.1 million on facilities, renovations, upgrades and deferred maintenance.

3. The final phases of construction are under way in 2022 on a $47.7 million University Event Center (right) and a $7.6 million Welcome Center. The $455,000 William Hooper Councill Eternal Flame Memorial has been completed.