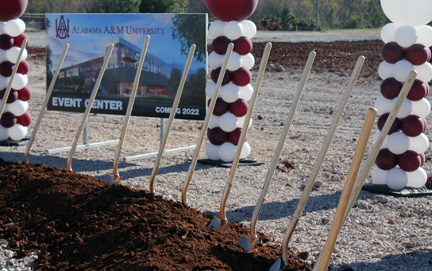 Transforming the Landscape of North Huntsville

Attendees heard enthusiasm and praise for the 6,000-seat facility that will be the venue for a wide range of sporting events, University ceremonies, and numerous other activities offered by the campus and the community.

President Andrew Hugine, Jr., said the construction of the new center represents the establishment of the best facility for the world’s best students.  Hugine’s enthusiasm was matched by Dr. Jerome B. Williams of Birmingham, Ala., president pro tempore of the AAMU Board of Trustees, as well as state and local officials, including Alabama State Representatives Laura Hall and Anthony Daniels; Commissioner Violet Edwards, Madison County Commission, District 6; and Huntsville City Councilman Devyn Keith.

President Pro Tempore Williams of Birmingham has praised the University’s leadership for the manner in which it addressed numerous obstacles, among them COVID-19, in addition to simultaneously planning for the future.

“When I first joined this board a number of years ago,” recalled Trustee Williams, “I could not have imagined this kind of thing happening with the challenges we faced at that time, and they were many.”

Turner Construction Company announced a month ago that construction on the 132,000-square-foot facility was underway. The new space will include an arena with a 6,000-person capacity, locker rooms, training rooms, an Alabama A&M athletic Hall of Fame, and a kitchen with the capability to provide meals for all events on campus.

The arena will host sporting events such as basketball and volleyball games, commencement exercises, and other university functions.

President Hugine called AAMU “an economic development engine” in the area.  He has also noted that  the center, which also will include the AAMU Athletic Hall of Fame, will “transform the landscape” of North Huntsville.