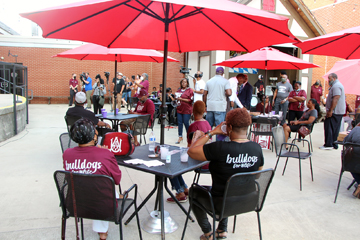 Sold out!  Those were the words echoed in a local brewery to those who lingered too long at the debut of 'Alma Mater.'   The highly-anticipated Alabama A&M University-inspired brew, aptly given its named by a group of MBA students, became available at Huntsville-based Straight to Ale Brewing on Thursday, May 27, 2021. AAMU and Straight to Ale celebrated the release at a 6 p.m. event at the brewery.   PHOTOS

Straight to Ale officials expected and received a significant turnout for the event, which introduced patrons to the new, light American-style lager.  Most attendees wore A&M's colors of marooon and white during the event.

This project came to fruition after two years of planning and strategizing by University administrators, faculty, staff, and students with Straight to Ale.

Archie Tucker, II, Vice President for Marketing, Communication & Advancement at AAMU noted, “We wanted a name that connected with Alabama A&M without it being exclusive to our University, but also one that appealed to most adults.”

The term alma mater, is a representation of the pride one feels about the school, college, or university that they attended.

Casey Warner, a recent MBA graduate who worked on the project stated, “Our group was really excited to participate in this initiative. It provided us with an opportunity to gain real world experience by pitching the name to the AAMU and Straight to Ale Marketing Teams. We are also excited to know that we have assisted the University in generating a new revenue stream that will support the campus for years to come.”

Alma Mater will be available on tap and can be purchased via 6-pack, crowlers, or growlers. The new beer's statewide distribution began the week of May 31, 2021. More details regarding additional locations will be revealed as information becomes available.