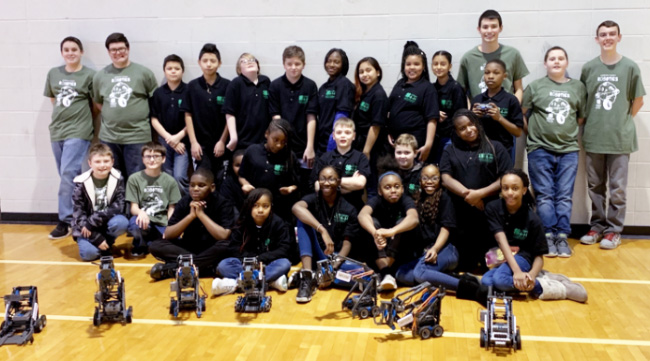 The middle school pupils were required to design and build a robot that would compete against other robots in an engineering game-based challenge. As part of their overall scores, teams were judged on robot design, programming skills, and use of the VEX IQ notebook. The VEX IQ notebook documented the design, mathematical and other processes used to create and operate robots. The competition allowed students to enhance their leadership, teamwork, communication, and other STEM-related skills.

"I coached two teams comprised of homeschoolers that rarely get the chance to work with other students. Participating on a robotics team helped them grow their communication and collaboration skills. These skills are essential for success in the twenty-first century,” said Jessica Williams, STEM coach and urban regional Extension agent.

“I was impressed with not only how well they worked together as a team, but also how well they communicated and strategized with other teams during the actual competition," she said.

The Lawrence County students will go on to participate in the Alabama 4-H STEM Expo on March 12 in Russellville.

“I am so proud of all my Urban 4-H participants. I truly saw them grow in confidence and understanding of the engineering process. I look forward to expanding our reach even further in the realm of robotics and STEM through our 4-H programs in Madison County,” said urban regional Extension agent James Fountain.