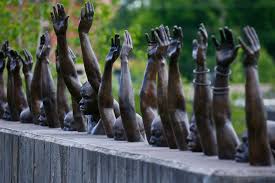 Clarke said attendees were fortunate enough to not only meet EJI founder Bryan Stevenson, but they also heard from Anthony Ray Hinton while touring the New Legacy Museum and The National Memorial for Peace and Justice.

Stevenson founded EJI over 30 years ago as a private nonprofit offering legal representation to people illegally convicted, sentenced unfairly, or abused in jails and prisons.  The organization opened the much-acclaimed Legacy Museum and the National Memorial for Peace and Justice in Montgomery, Ala.

Hinton is an activist, writer and author who was wrongly convicted of the murders of two fast food restaurant managers in Birmingham, Ala., in 1985.  He was held on death row for nearly 30 years before his release in 2015.

Clarke stated that the students “really enjoyed” the trip and were deeply moved by the museum visits.  About 25 participants from the University of Alabama in Huntsville (UAH) also visited the EJI complex, said Clarke.