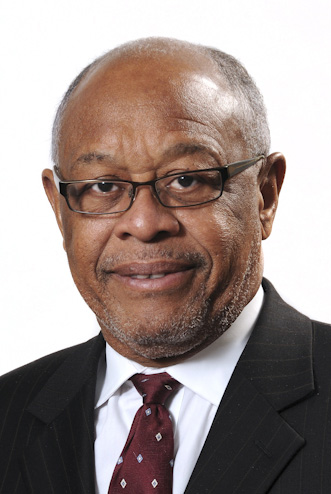 In his last trustee meeting as the 11th president of Alabama A&M University on Friday, Dr. Andrew Hugine, Jr., praised God for “blessings and favor” upon him, his family and AAMU.

Hugine addressed the Board during its annual fall regular meeting on Friday, October 29, in the Westin Hotel Ballroom in Birmingham, Ala., noting that he had come full circle in that his journey toward the AAMU presidency really began during an interview in Birmingham.

“I am blessed to have had a board that has been willing to work to advance the University,” said Hugine in his emotional last words.  He added that many challenges confronted by the Board over the years took courage, stating that “nothing that is worthwhile comes easy.”

Although Hugine has served as president of two revered 1890 land-grant institutions, including his alma mater South Carolina State University, the educational administrator considers his tenure at AAMU his career highlight.

Quoting management guru Peter Drucker, Dr. Hugine noted that “there is no success without a successor.”  Toward this end, Hugine said he has “always believed in giving young people a chance” to become leaders.  Several members of his young cabinet have secured administrative posts at often larger institutions, and three now have become college presidents.

Hugine also praised the phenomenal support of AAMU alumni, whose giving has surpassed the national average for alumni giving.  While  AAMU has yet to reach the Promised Land, Hugine said he is confident it will do so through continued strength and courage.

Later, an ad hoc committee formed to honor the 11th president--and chaired by Trustee Jeanette Jones--gained approval to name a campus structure in honor of President and First Lady Hugine.  The university’s H-shaped and newest 600-bed residence hall facility will be named the “Andrew and Abbiegail Hugine Living and Learning Complex.”

The facility is situated on Meridian Street, directly across from Legacy Lake, named in honor of the University’s first ladies. The project was spearheaded by First Lady Abbiegail Hugine.

Following several Hugine accolades from trustees, President-Elect Daniel K. Wims thanked Hugine for his service at AAMU, for keeping academia at the forefront and for his senior leadership on several boards and committees.

President Pro Tem Williams expressed that he was humbled by and appreciative of the Board’s unanimous support.

“I intend to do what I feel is the right thing to do, placing principles over personalities, and making decisions based on the information at hand.”

Williams said he remains open to input and aims to eliminate mediocrity and to foster a culture of thinking bigger through the power of imagination. He went on to praise Hugine’s leadership and he expressed confidence that President-Elect Daniel K. Wims will “move AAMU to the next level.”

Faculty Senate President Jeanette Jones thanked Hugine for his 12 years of leadership and called him “a delightful person to work with” on several university issues.  She further praised his honesty and integrity, and an administration under which significant progress was made for faculty and staff, particularly in the area of compensation.

Dr. Jones commended the board for its role in ensuring faculty input in the decision leading to the selection of the 12th President, Dr. Daniel K. Wims.

Trustee and Executive Student Government Association President Austin Smith said he was appreciative “for all the lessons” he learned from Hugine and thanked the President for stepping in where his recently deceased grandfathers had been unable to continue.

Trustees will hold regular and subcommittee meetings February 17-18, 2022, in Huntsville, Ala.