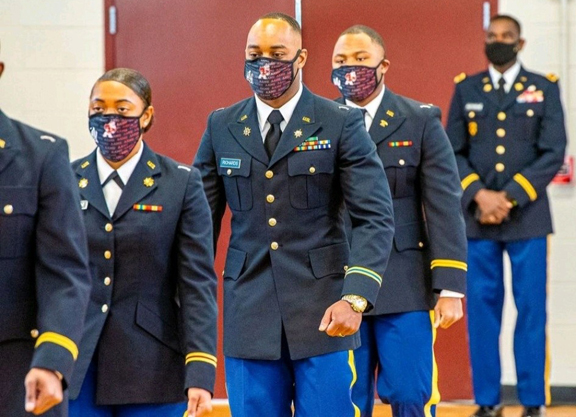 2nd Lt. Deondrick Warner of Greensboro, Ala., graduated from AAMU with a Bachelor of Science in business administration in December. A member of Alpha Phi Alpha Fraternity, Incorporated, and Phi Beta Lambda Business Fraternity, Warner was commissioned into active duty as an Ordnance Officer and will begin his career at Fort Lee, Va.

2nd Lt. Jakius Malik Brown of Atmore, Ala., graduated from AAMU with a Bachelor of Science in logistics and supply chain management in December. A former vice president and current member of the Collegiate 100, Brown was commissioned into the Army Reserve as a Quartermaster Officer. His first duty station will be Mobile, Ala. Next year, Brown heads to Staten Island, N.Y., as an area manager with Amazon.

2nd Lt. Savoni Danielle Houston of Huntsville, Ala., graduated from The University of South Alabama with a Bachelor of Science in therapeutic recreation in 2016. Houston earned her MBA at AAMU in December. Houston joined the Alabama Army National Guard in April 2017 and was commissioned into the Army Reserves as a Quartermaster Officer. The Logistics Analyst II with Whitney Bradley and Brown will begin her military career at Fort Lee, Va.

2nd Lt. Timothy Richards from Brooklyn, N.Y., graduated from Oakwood University in 2010 and became a Huntsville Police Officer. In 2015, he enlisted in the Army National Guard, toured in Jordan to serve in “Operation Inherent Resolve,” and joined the AAMU ROTC Program to become an Army officer. Richards was commissioned into the National Guard as an Intelligence Officer and was accepted into the UAH political science/public policy program.

2nd Lt. Christopher Thompson from Montgomery, Ala, graduated from AAMU with a Bachelor of Science in business administration in December. Thompson is a member of Phi Beta Lambda Business Fraternity, Incorporated, Collegiate 100 male mentorship program, Peer to Peer mentorship, and in Spring 2019, was voted “Mr. ROTC.” Thompson commissioned into Quartermaster through the National Guard. His first duty station will be with the FSC 877th EN BN in Huntsville, Ala.

Including its partnership schools, the University of Alabama in Huntsville and Athens State University, the AAMU Bulldog Battalion has over 180 cadets participating in the AAMU ROTC Program.