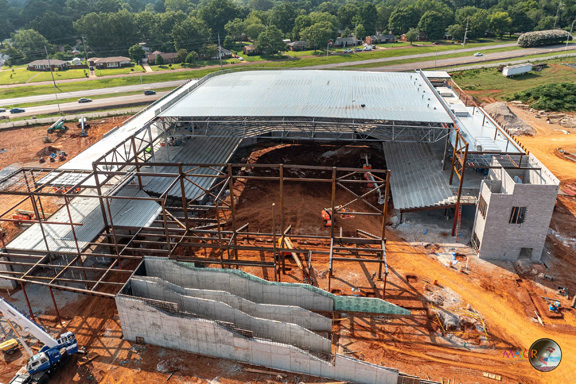 Opening up the month of August, construction seems to be making significant strides on two major projects on the Alabama A&M University campus, according to Brian Shipp, director of facilities.

Just three short months ago, workers had moved over 12,000 cubic yards of dirt and had completed more than 90 percent of the excavation, grading and prep work for the 132,000 square foot Event Center.  Construction crews also were beginning to erect the steel structure of the building and were starting to install cast-in-place concrete in the event bowl.

Super-long trusses weighing in at around 20,000 pounds required two cranes.  All and all, a parade of cranes, track hoes, dump trucks and excavators have helped to clear the way for what will be a 6,000-seat facility on the southwestern corner of the campus, gracing Memorial Parkway.

Ultimately, the Event Center will host a series of sporting events, ceremonies and other campus and community activities.  Other listed amenities include locker rooms, training rooms, the AAMU Athletic Hall of Fame, and a mammoth kitchen.

Currently, the project will continue in the building stage before entering a dry-in stage for about six months.  The project is scheduled for completion in fall 2022. 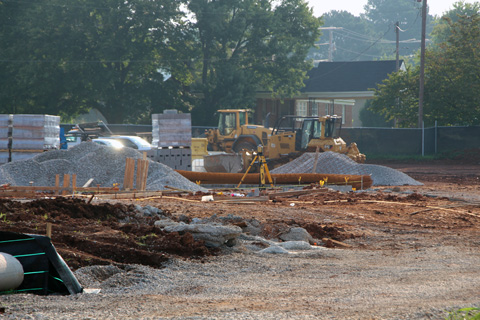 Groundwork on the Welcome Center (r), located on the corner of Chase Road and Meridian Street, is nearing 50 percent completion.  This will be followed in three to four months by the building stage, stated Shipp.

The Welcome Center will serve as a one-stop shop for student information, house the Office of Admissions, executive conference space, retail space and commercial restaurants.