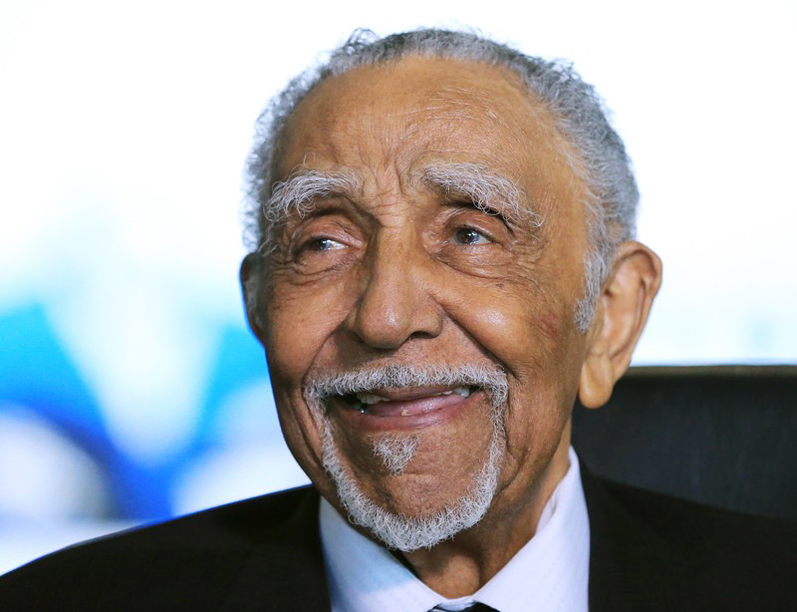 An Alabama A&M University alumnus aptly dubbed by the NAACP as the “Dean of the Civil Rights Movement” died Friday, March 27, in Atlanta, Ga., at the age of 98.

Born to a teacher and shop owner in Huntsville, Ala., in 1921, the Rev. Dr. Joseph Echols Lowery co-founded the Southern Christian Leadership Conference (SCLC) and was a vocal advocate for civil rights.  He graduated from William Hooper Councill High School.  After his collegiate experiences at Knoxville College (Tenn.), Alabama A&M University, Paine College (Ga.), and the Chicago Ecumenical Institute, Lowery launched his career as pastor Warren Street Methodist Church in Mobile, Ala.

It was during this period in the 1950s when he met Rev. Dr. Martin Luther King, the civil rights martyr who was pastoring at Dexter Avenue Baptist Church in Montgomery, Ala.  He is credited for helping to lead the Montgomery Bus Boycott following the arrest of Rosa Parks in 1955.  Lowery and King, with Rev. Ralph Abernathy and other civil rights activists, formed the SCLC in 1957.  Two decades later, Lowery would head the organization set it on a new course encompassing a range of social and environmental issues.

During the historic Selma to Montgomery March in 1965, Lowery joined organizers on a mission to deliver demands to Alabama Governor George Wallace.   State troopers violently attacked the peaceful marchers on the Edmund Pettus Bridge in Selma, leaving many of the marchers bloodied and badly beaten.  Congressman John Lewis, among the marchers that day, suffered a fractured skull during the beatings.

The distinguished leader not only received the NAACP’s coveted Lifetime Achievement Award in 1997 but also the Presidential Medal of Freedom from President Barack Obama in 2009.  He received honorary doctorates from several colleges and universities, including Morehouse College, Alabama State University and the University of Alabama in Huntsville.

A crowd of several hundred citizens attended the Dr. Joseph E. Lowery Boulevard Dedication and Ribbon Cutting ceremony back on September 14, 2016.  Lowery Boulevard con­nects to Governors’ Drive at Harvard and runs into what is considered down­town Huntsville, Ala.

Lowery and his three daughters, other fam­ily members and friends, along with members of the Lowery Foundation Board, were in Huntsville for the Dedication and Ribbon Cutting.

Dr. Lowery spoke about having grown up in Hunts­ville, and he thanked the Mayor and City Council for the hometown honor.

Additional comments were made by SCLC Presi­dent Charles Steele, Jr., and local NAACP President Rev. R. L. Shanklin. The Benediction was given by Pastor O. Wendell Davis of Union Chapel Missionary Baptist Church. The Rib­bon Cutting ceremony was performed by the Hunts­ville/Madison County Chamber of Commerce.

Almost without exception, whenever there was a pivotal moment throughout the Civil Rights Movement, Lowery was a part of it.  Lowery, Rev. Ralph Abernathy, Rev. Fred Shuttlesworth and S.S. Seay, Sr., were sued along with the New York Times as part of a libel suit.  The men lost their cars and other property to the State of Alabama.   It took the U.S. Supreme Court to reverse the decision in the landmark New York Times Co. v. Sullivan case, which many legal scholars call the most striking freedom of the press case in history.

Rev. Lowery co-founded and led a consortium of black advocacy groups that effectively protested the existence of Apartheid in South Africa from the mid-1970s through the end of white minority rule there. He also was among the first to be arrested outside the South African Embassy in Washington, D.C., during the Free South Africa movement.

The venerable Lowery served as the pastor of Cascade United Methodist Church in Atlanta, Ga., from 1986 through 1992.