The Fox with Boots on the Ground 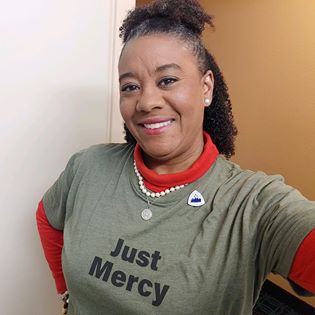 Amid the Cartilage, an Unapologetic Activist with Backbone

Self-pride can be hard to come by when you’re a young black girl born into a world where every culture seems to matter but your own. However, Erica “Fox” Washington possessed a seed of inner strength and consciousness that pulled her through a period that could have formed an entirely different individual. Born a military child in Grand Forks, North Dakota, Erica grew up in Davis, California, just 14 miles west of Sacramento and home of the 40,000-student University of California, Davis campus.

Although she made up only a sprinkling of blacks in what was otherwise “a mecca of diversity” due to the small town’s looming big college aura, Erica said that she thoroughly enjoyed the environment of her childhood. “I attended a predominantly white Methodist church in this big college town,” recalled Erica. “I was introduced to people from so many different countries and all walks of life.” Still, as she reflects back over her much younger years, she notes that there was nothing taught about civil rights or black history, outside of the central figures of Martin Luther King, Jr., and Rosa Parks. She would learn appreciative amounts about the Holocaust and Cesar Chavez; would relish her class visits to Pier 39 and Alcatraz; and would see along the way numerous Hell’s Angels. But she would learn nothing about the Black Panthers and their integral connection with Oakland, only an hour’s drive away. Yet, despite the pre-“We Are the World” pretense of her surroundings, she was one of only two black kids in kindergarten, the only black kid in all her classes in grades 1-6, and among only a handful in junior high. By the time she entered Davis High School, Erica joined a flood of black students—eight, to be exact.

Black faculty and staff were also almost nonexistent. Hmmm. There was a positive interaction with Mr. Joe Valentine, a principal in the fifth grade (He vanished a year later). Then there was Mr. Robbie Robinson, a black audio-visual director in the library. Robinson also managed the high school radio station, where each Wednesday Erica would introduce her school mates to airwaves filled with soul and R&B. Even this radical departure by Davis High standards was tempered by her fascination with disc jockeys Wolfman Jack and KFRC’s “Dr. Don” Rose. 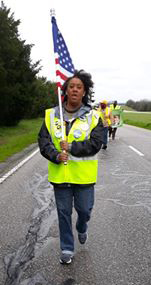 Nonetheless, Erica views her childhood as one that captured the very essence of an outgoing child who some teachers would write, in notes sent home, could “not be quiet.” Also, she believes she found an equal comfort in leading or following, although the seeds of activism were beginning to be sown.

“When I was in the 12th grade, there were these four Vietnamese students in my math class,” said Erica. Although they did not speak English well and seemed to huddle to themselves, as if shielding themselves from the mean and racist teacher, she could tell that “they were nice boys.” In a horrid incident just before the end of that school year, on May 4, 1983, a white kid killed Thong Hy Huynh, one of the Vietnamese boys, in what was termed by area media as a racist stabbing. Huynh’s mother had moved her family to Davis because she thought it would be a safe place for her eldest to gain an education. Erica participated in an organized memorial run to raise money to contribute to the boy’s family.

She believes that shocking event put her on a path toward working feverishly to make the world a better place.

However, the life-altering death at Davis High nearly 40 years ago was followed by a relatively calm college experience at her beloved Alabama A&M University. A&M was a major college choice as far back as the 10th grade, she remembered, because it was located in a city where nearly her entire mother’s side of the family resided. She found the mid-1980s a fun-filled, fascinating time to be a student on “The Hill.”

“I attended A&M from 1983-88, and I don’t recall any real issues, protests or rallies,” said Erica, drifting into a flashback with Cameo performing virtually on her mental stage. “The '80s were a time to cherish.” There might have been some things happening in the city, she added, but The Hill was somewhat insulated from that back then. Not only did she leave the traditional, corps-style band routine taught to her by Robert Gonzales back at Davis High, but AAMU had stuffed her clarinet with a fierce show-band style in true HBCU tradition. That’s why to this very day she considers retired AAMU band director Arthur Wesley a chief mentor, along with English professors Dr. Mattie Thomas and the late Gladys C. Nance.

What AAMU lacked in activism at that particular moment, though, it more than made up for in African-American history and black consciousness. She learned a great deal from AAMU historian and poet Anne Rutledge, who informed Erica that Emancipation did not free all of the slaves, and she even learned some precious nuggets about the black history of Huntsville. That enthusiasm for black history and information on the black struggle was also fed by some of her family members.

The hunger of black history and the black struggle continued to feed Erica by the means of HBCUs. For instance, when she worked at the campus radio station at cross-state rival Alabama State University, which was managed at the time by a fellow AAMU alumnus, Erica made a request to cover a reenactment of the historic Selma to Montgomery march and to report the event back to the station. During the process, she became familiar with the event organizers, among them Shirley Floyd, who over subsequent years boosted Erica’s involvement and gave her an even more prominent role in the organization of the marchers, preparing resolutions and other activities.

Perhaps her passion for voting rights stems from those strong Selma connections. Although she regrets that many young African Americans know little about the key, old figures from the voting rights era, she believes such unawareness can be easily changed into an eagerness to learn black history through the right approach.

“They do know about Trayvon Martin,” said Erica. “So, you inform them on how a proactive voting campaign possibly could have thwarted what became Florida’s Stand Your Ground law; enabling Trayvon to still be alive today.”

Erica is also passionate about issues such as police reform and participated in what she said was a peaceful rally in Huntsville in summer 2020 that was provocatively met with tear gas and rubber bullets. Still, today’s young activists offer her a sense of hope because of their seriousness and perseverance. She said that it is because of them that George Floyd’s death is making a difference throughout the world. After some local college student voting snafus in 2017, she wanted to be a part of the solution and was among the first to volunteer for AAMU’s Civic Engagement Committee organized by Dr. Gary Crosby, vice president of student affairs, and led by staffer Monica Clarke.

Erica and the Committee moderated a pool of HBCUs in a Power of HER Vote virtual discussion in mid-August 2020 that served as a chance to galvanize women, students and women of color at the ballot box. The virtual discussion, and salute to Fannie Lou Hamer, acknowledged the 100th Anniversary of the 19th Amendment and Suffrage Act. The activity was the catalyst of motivation for young women from Spelman, Florida A&M and other HBCUs.

Later, a festive voter registration event in the local Calvary Hill neighborhood one day was met with suspicion, perhaps because of COVID-19 reservations, but Erica moves on and says there is still much work to be done. She understands that sometimes movements have to undergo a certain ripeness. Some injustices squeeze by only because all of the elements for change have not matured and maneuvered into place.

“There’s no turning back now, though,” Erica said. “Laws are already changing. Flags are coming down. Monuments are being removed to their proper places.” Although the numbers of protesters may have died down some, Erica said there is “a core group of us” that is deciding what conversations to bring to city hall. Sometimes she becomes so inundated with civic events that she is the first to admit that she doesn’t always get enough sleep.

“There are so many e-mails, social media and Zooms of which I am a part,” she explains. All of this is coupled with her long-time radio activism.

“Black college radio stations can have a special role in the sharing of the diverse views that people need to hear. They have to be inclusive and bring all views and all walks of life to the table, showing the other side of the minority perspective,” she said. “Young people are amped up because they recognize and own that it is their turn now to lead. We are not stopping. Our clergy is not stopping. Strategy is continuing locally. Marches are still going on around the nation as people deal with the issues that concern them,” Erica stated.

“Black Lives Matter. Our votes matter," she said. "We have to keep boots on the ground and voices in the air. We have to carry the blood-stained banner.”