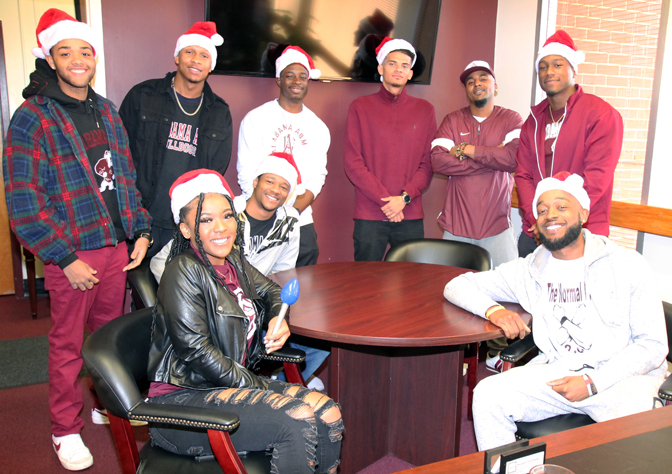 As the holiday season continues throughout the Tennessee Valley, “The X,” about a dozen energetic cast members from “The Normal Life” film, visited Alabama A&M University recently. The film delves into the experiences of a group of students during the life-changing days at AAMU in the early 1990s.  Work on the project continues to progress exponentially, as alumni who form the nucleus of the film project make new and more phenomenal strides with each passing week.

This time, however, film team members were on an entirely different mission.  The twelve wants as many people to experience the magic of the holidays as possible.  Thus, members will hold a toy and blood drive.  Three donation sites have been set up at Hair Queen Beauty establishments in Huntsville (4710 University Drive L1 and 2211 University Drive NW) and Decatur (2812 Spring Avenue SW Suite U).

The young cast members said they are well aware of the dire and lingering impact COVID-19 has had around the world, and they wanted to be among the first to “do our part” to make sure that families in the greater Huntsville area “a very, very special holiday season.”

The group will be collecting winter clothing items, such as coats, jackets, sweathers, hats, gloves, along with blankets, as well as nonperishable food items and unwrapped toy gifts.  All the donations will be given to families in need in the Huntsville area.

“The X” wants people to “give with their hearts” to help make the holiday season a great one.  Additionally, monetary donations will also be accepted.  For more information, contact AAMU alums Paul Graves at malcomb73@yahoo.com or Khari Embery at kharioe09@gmail.com or watch their VIDEO appeal.