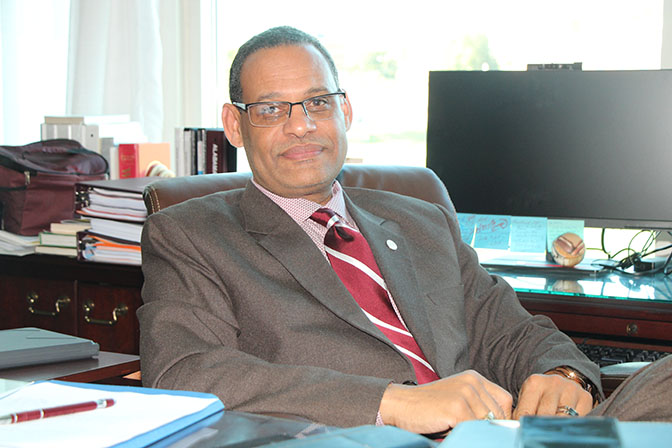 From the Shelf: A Wims Interview

A large, otherwise dimly lit room—except for the large windows that boast an expansive, northern view of the hillside campus—showcases a designer’s concept of the degree of opulence befitting a college president.  Behind a desk nearing the size of his responsibilities sits the president of Alabama A&M University.  Over his left shoulder and on the other side of the thick plate glass is the faraway Wilson Building, an Olympian structure from which imaginary griffins pounce upon the enemies of black higher education.

So much to do.

Politely distracted, the twelfth president seems indulged in a Sisyphean task of rolling through paperwork, scanning letters, scribbling notes … then passing the pile on, only to receive a new one. Yet, through it all, he realizes that he must come up for air, somehow defeat the robotics of the moment, and somehow open up …

Daniel K. Wims was one of three children born to Fountain and Cathryne Wims in 1964 in Arlington, a mostly Black town of hardly 1,500 inhabitants, located in southwestern Georgia.  It is the birthplace of the father of President Jimmy Carter; is equally distant between Dothan, Alabama, and Albany, Georgia; and has the audacity to share its meager city limits with Calhoun and Early counties.  But more often than not, a question posed to the administrator regarding his hometown elicits the response of “Lumpkin,” a nearly identical town about 45 miles north.

Wims attended a segregated Lumpkin Elementary School initially, which was forcibly desegregated during his elementary school years, and then proceeded about eight miles eastward to a junior high school in Richland.  He returned to Lumpkin to receive his diploma from Stewart-Quitman High School, a bi-county high school at which his father served as Principal.  Still, there were vestiges of segregation that would follow him into his college years.  These remnants consistently revealed themselves in the inarguable lack of resources and quality of equipment.

In junior high school and at Stewart-Quitman, a teenage Wims was heavily influenced by agriculture teachers and Tuskegee graduates, Mr. Joseph Booth and Larry Powers.  Both were keen on student development and set forth expectations for the students, and Powers’ own unbridled yearning for higher educational pursuits greatly impressed the teen.

Powers left the rural area to acquire a Ph.D. in agricultural education from Michigan State University.  He later became an education administrator at North Carolina A&T State University and even served as Dean of Education at Alabama A&M University for nearly four years, with part of that time being served with Wims as Provost and Vice-President.

By the time he entered his high school years at Stewart-Quitman, Wims was fully engaged on a path toward an agriculture-related career, already achieving distinctions as a student in 4-H and Future Farmers of America.  Wims’ desire was to attend an HBCU as a scholar athlete and his primary reasons for enrolling in the 1890 land-grant university, Fort Valley State College, were the opportunities it provided in both athletics and the agricultural sciences, even though he was neither a gifted student nor a talented athlete.

Whenever he ponders the early years of his academic career, Wims said he envisions himself as a writer, teacher, public intellectual or theoretician in the humanities and social sciences, with degrees from private colleges and universities.  But fate would have it that he would never participate in collegiate athletics and certainly not major in a social sciences or humanities at an elite private institution.

Nonetheless, Wims pursued agricultural sciences with agronomy as a major, and he credits his lengthy role as a higher education administrator and the significant early support he received from African-American educators and administrators, such as FVSC agronomist Malcolm C. Blount; FVSC Dean and later President of Morris Brown College, Dr. Samuel Jolley; and former Fort Valley President, Dr. Luther Burse.

Similar to the role they played under the leadership of the aforementioned giants, historically black colleges and universities (HBCUs) will continue to be a sought-after entrée on America’s diverse menu of higher learning, Wims has suggested.  HBCUs only comprise about three percent of the higher education institutions in the United States and would not have the capacity to accept every college-bound African-American student anyway.  Yet, their ability to transform lives of the students they serve is astonishing, he said.

“AAMU and HBCUs have the same role, despite the huge disparities in educational outcomes, degree programs and resources,” said Wims.  Heavily concentrated in the Southeast, HBCUs still have a national mission of providing access and opportunities to the underserved, Wims said.

When asked whether HBCUs’ future support system is in any way endangered by the changing demographic of the African-American, slave-descendant population (spurred primarily by a growing percentage of blacks from the African diaspora), Wims indicated that he doesn’t think so.

AAMU’s new president does believe, however, that continued successes will help to maintain HBCUs’ presence for future generations.  He also counters that HBCUs in fact emerged from the convictions of African-American and other educators who, themselves, were not necessarily totally shaped by HBCUs.  The contributions of a Benjamin Mays, a George Washington Carver, and a W. E. B. Du Bois to black higher learning were phenomenal. The HBCU leadership prototype and mold would eventually be cast with Booker T. Washington, Mordecai Johnson and a few others, Wims recalled.

“We have to stick to our models,” commented Wims, adding that HBCUs must be more adamant in defining their mission and should charter success by the measurable improvements made among the students for which the schools were formed to serve.  Thus, HBCUs’ future success is dependent on a leadership that leads and not impedes, offered Wims.

“We must prepare for the hurdles that lie ahead by fighting for a level of funding that adequately addresses historical shortcomings,” said Dr. Wims.  “Boards that govern HBCUs must be more service-oriented and possess a greater understanding of polity as it relates to higher education.”

Wims further stressed that several HBCUs are dealt a harsh blow simply by having been established in Southern states with less resources, while others prosper far better due to being in better-resourced states such as Texas, North Carolina and Florida. A more immediate aim, Wims asserted, is to first further posture AAMU to become a model for the 1890s of the limited-resource states.

Another hurdle to overcome, he admitted, is any tendency to overlook the need to ensure multifaceted successes of black males on the HBCU campus.  Doing so undergirds families and communities.  Thus, Dr. Wims said his administration will put forth a concerted effort to recruit more black male professors and administrators and to assign them mentors.

Wims said he has learned much from watching and working under strong leaders, including Clinton Bristow, Jr., of Alcorn State; Larry E. Rivers of Fort Valley State University; and Andrew Hugine, Jr., the eleventh president of Alabama A&M University and his predecessor.  He also received some leadership inspiration from afar from education administrators like historic Benjamin E. Mays of Morehouse and Frederick S. Humphries of Florida A&M University.

Looking ahead to 2032, Wims sees positive change on the horizon in the form of an enrollment expansion in the neighborhood of about 30 percent; achieving the distinction that comes with being a Research ll institution; becoming even more entwined with the rapid growth of Huntsville; and remaining a model for the 1890 institutions situated in limited-resource states.  Because of the examples set by such noble leaders, Wims is confident that he will continue to make significant strides at AAMU, as well.

Cornel West: “The precursor to any personal or social change is communication”