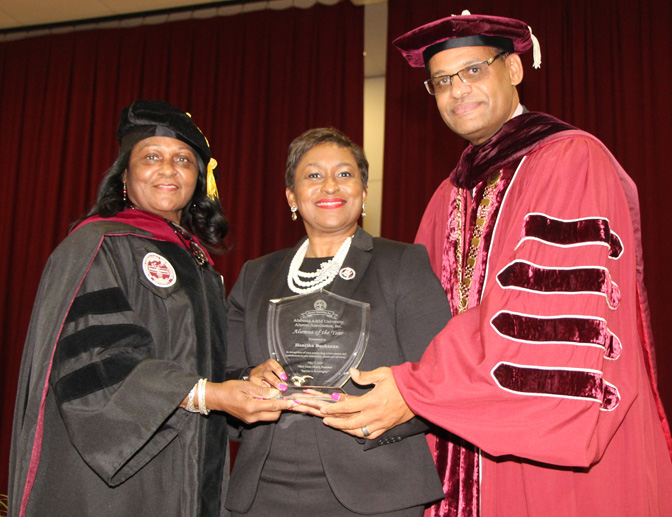 Officials at Alabama A&M University proudly honored Henrika Buchanan with the distinction of  “Alumna of the Year.”

Buchanan is a fourth-generation AAMU “Bulldog” and a 1997 and 1999 graduate. Buchanan is an active member of the Washington DC Metro Chapter of the Alabama A&M Alumni Association, Inc. Her chapter engagement involves focusing on fundraising and scholarship activities to ensure a pipeline of young, talented prospective AAMU students from the District of Columbia, Delaware, Maryland and Virginia. On a broader level, Buchanan is also a member of the national fundraising committee for the Alabama A&M Alumni Association, Inc., and was newly elected member-at-large. She most recently has been appointed to the University’s Alumni Advisory Council by AAMU President Daniel K. Wims.

She currently serves as a National Practice Consultant and Vice President for HNTB Corporation, one of the leading transportation infrastructure design firms in the country. Buchanan is a former Senior Executive at the Federal Transit Administration (FTA) with over 20 years of experience, including administering the federal transit funding program at the Regional and Headquarters levels, and directing the transit safety, major capital project oversight and program oversight compliance programs.

The Normalite has also served in the FTA as Associate Administrator for Transit Safety and Oversight, as well as Chief Safety Officer of FTA, where she was responsible for establishing and implementing the federal safety regulatory framework. Buchanan also served as the Associate Administrator of Program Management at FTA and was responsible for an annual $12 billion funding program and the federal oversight of more than $117 billion in capital investment grants with transit agencies across the nation.

Over the course of her career, Buchanan has frequently been recognized for her results-oriented work, earning numerous departmental and industry awards. For her sustained career achievements, she has received the Presidential Rank Award, which is the highest honor bestowed by the President of the United States upon Senior Executives in the government. Moreover, she received the Outstanding Achievement Award (Gold Medal), which is the highest award of the United States Department of Transportation, and she has been recognized by Mass Transit Magazine for her contributions to the transit industry.

Buchanan is a native of Hillsboro, Ala., and currently resides in Alexandria, Va. She is the daughter of Gloria Buchanan ‘67 and Henry Buchanan ‘70, and a member of the Historic Alfred Street Baptist Church. Buchanan received a Bachelor of Arts degree in political science and the Master of Urban and Regional Planning degree from Alabama A&M University. She received her law degree from Georgetown University Law Center.