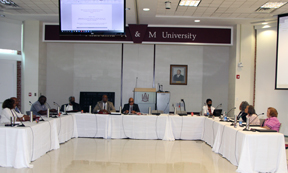 Nearly all members of the 15-person advisory group met for an inaugural meeting designed to set parameters for the team.  Attendees received a copy of proposed bylaws, the University’s Points of Pride document, and they were presented opportunities to become engaged with key administrative initiatives.