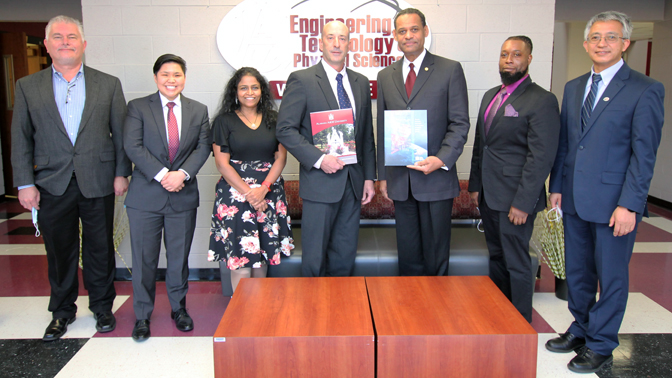 A lingering mandate to diversify the nation’s pipeline of talented men and women in science and engineering has led to a five-year memorandum of understanding between Alabama A&M University and Sandia National Laboratories.

Government and University officials joined forces at AAMU Wednesday, January 26, for a series of discussions, presentations and tours, culminating with the signing of the MOU and subsequent handshake by AAMU President Daniel K. Wims and Albuquerque, N.M.-based Sandia’s Steven E. Gianoulakis, senior manager of Autonomy and Unmanned Systems.

Dr. Zhengtao Deng, interim dean, and faculty and staff of the College of Engineering, Technology and Physical Sciences, hosted the session.  Deng says the partnership will open the door for increased research between Sandia and AAMU.  The overall goal, however, is the ultimate creation of a robust and deliberate partnership via collaboration between the national laboratories and a historically black college/university (HBCU).