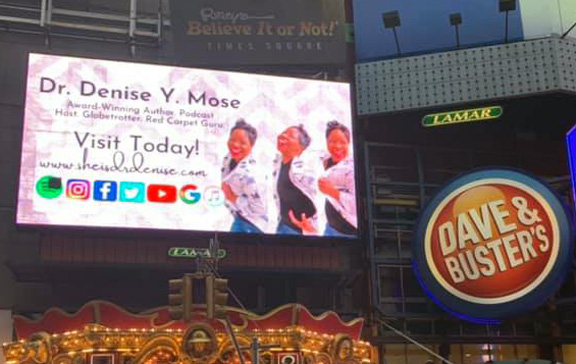 Dr. Denise Y. Mose, whose impressive bio includes educational credentials from AAMU, Oxford and Harvard, has also been an educator who has been given the unique opportunity to carry her craft around the world.  Mose’s supporters, she says, arranged for her image and projects to be displayed at Times Square during a week-long run from March 8-15.

Mose credits the ”international global exposure” to her new, widely-distributed book “Blind Faith”; her podcast, “Self-Discovery on Sunday with Dr. D”; her work as a TV personality and interviewer; and her volunteer work with several organization.

“You never know who is watching you and is in a position to bless you!” said Dr. Mose, in response to AAMU social media coordinator and long-time broadcast anchor Debra Daniel.  “I am a true example of that Bulldog Pride and how to capture life and appreciate each day.”