The Alabama A&M University Board of Trustees on Friday, June 18, unanimously approved a $211 million operating budget for FY22.  Presented by Dr. Lynda Batiste, AAMU’s interim vice president for business and finance, the budget will include a 6 percent across the board salary increase for faculty and staff.   VIDEO

In a later report, Trustee and Faculty Senate President Jeanette Jones praised President Andrew Hugine, Jr., for leaving a significant positive imprint on the University and for expertly navigating within the University culture.  She especially noted his favorable response to a request made by the Faculty Senate in February.  That request urged the University complete an approved plan calling for adjustments to faculty salaries, as well as to staff compensation.

Trustees also approved recommendations for tuitions, fees, and room and board, along with a $200, 2019 allocation of $200 “Bulldog Bucks” for students to use on amenities in the new Welcome Center, which is scheduled for completion in Spring 2022 and will house the Office of Admissions.

Trustee and Faculty Senate President Jeanette Jones thanked the Office of Distance Education, Extended Studies & Instructional Technology (ODEES) for a smooth transition into online instruction and related modalities.  Reflecting on responsiveness of the administration to the needs and concerns of University employees, Jones noted that the faculty and staff "have enjoyed working with and supporting" Hugine, who will retire in December 2021. 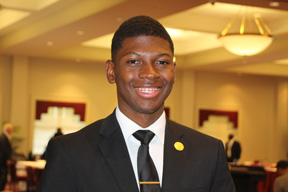 Trustee and SGA President Austin Smith (left) of Montgomery, Ala., stated that he is honored to serve in his current capacity.  He then recognized the members of his executive board, Miss Alabama A&M and her court, and the student senators.

The Presidential Search has been launched by AcademicSearch, coordinated by Drs. John Garland and George E. Ross.  The position is open until filled but only by applications received by July 30, 2021, at aamu@academicsearch.org.  The prospectus is available at www.aamu.edu.

President Andrew Hugine, Jr., shared with the Board and attendees an HBCU Times article entitled “The Restoration of Alabama A&M.”  The piece chronicled the growth and expansion of the University over the past 12 years in terms of capital improvements, curricular expansion and fiscal integrity.

Board President Pro Tempore Jerome B. Williams expounded on his “re-imagine” charge, which called for supporters of AAMU to envision the institution in ways not limited by its resources, but as a bastion of higher learning with limitless possibilities.  Williams went on to say that the time is near to hold every entity associated with A&M accountable for playing some role in its overall success.

Dr. Williams further stated that in order to prepare and empower future generations, it could prove necessary that ongoing relationships would have to be reviewed to determine if they are parasitic, symbiotic or empowering.