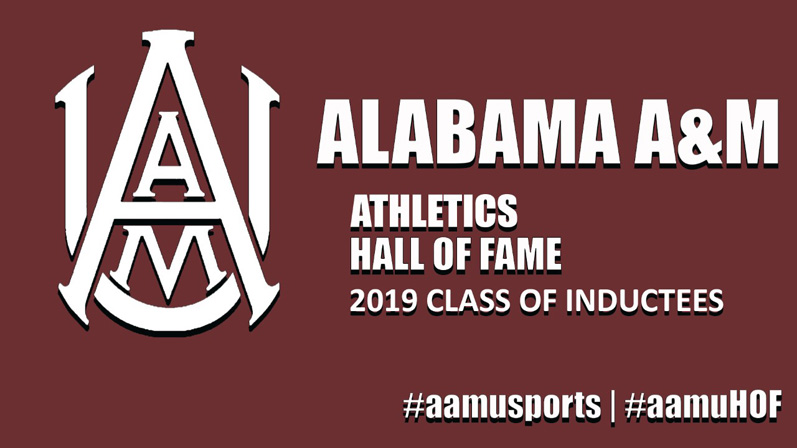 Eight Will be Inducted

The Alabama A&M Athletics Hall of Fame has announced its 2019 class of inductees. Eight new members are entering the Hall of Fame.

Longtime Alabama A&M sports photographer Sidney Jackson is being recognized by the Hall of Fame Advisory Board as a special contributor.

“Alabama A&M Athletics is steeped in history and tradition,” Hicks said. “As we continue to build the Hall of Fame, we are honored to have a group as distinguished as this to enter the Hall of Fame with the 2019 Class. Their enshrinement represents the impact these individuals made during their time at Alabama A&M University, as well as how they represented the University following their time here on ‘The Hill.’”

Mathis is one of Alabama A&M’s most-recognized alumni.

During his collegiate football career, Mathis was a four-year starter from 1999-2002 on Alabama A&M’s defense, where he emerged as one of the most-prominent pass rushers in Southwestern Athletic Conference history.

In 39 games at Alabama A&M, Mathis recorded 221 tackles while setting a program records with 44 sacks and 20 forced fumbles.

As a senior in 2002, Mathis set a Division I-AA (now Football Championship Subdivision) record with 20 sacks. That season, he also recorded 58 tackles while setting an Alabama A&M record with 32 tackles for loss while forcing 10 fumbles.

After graduating from Alabama A&M with a bachelor degree in Physical Education, Mathis was selected in the fifth round of the 2003 NFL Draft by the Indianapolis Colts, where he played 14 seasons while helping the franchise win Super Bowl XLI.

During his NFL career, Mathis was a five-time Pro Bowl selection and was the 2013 AFC Defensive Player of the Year.

Mathis retired as a player following the 2016 NFL season, finishing his career as the Colts’ all-time sacks leader with 123. During his NFL career, Mathis recorded 604 tackles, 52 forced fumbles, 17 fumble recoveries and an interception. He finished his career ranked 17th in NFL history in sacks, and his 47 sack-forced fumbles are an NFL record.

Even though Mathis retired from the NFL as a player, he continues to work with the Colts as a pass rush consultant.

Austin is one of the most-successful coaches in Alabama A&M history.

During her tenure as the Alabama A&M women’s volleyball coach, Austin amassed more than 600 victories while leading the program to 17 conference championships.

When Austin took over the women’s volleyball program, Alabama A&M was an NCAA Division II member competing in the Southern Intercollegiate Athletic Conference. While in the SIAC, Austin led Alabama A&M to 11 conference championships.

In 1999, Alabama A&M made the transition to Division I athletics, joining the Southwestern Athletic Conference. Austin’s volleyball program had no problem with the step up in competition, making an immediate impact by winning five straight conference championships from 2000-05.

Austin retired as the Alabama A&M women’s volleyball coach following the 2006, finishing her career with a 603-225 record.

Even though Austin stepped down as a coach in 2006, she continued to be involved in Alabama A&M athletics. In 2007, Austin was hired as Alabama A&M’s Director of Athletics, becoming one of the first black female athletic directors in NCAA Division I athletics.

Batts was a two-sport athlete at Alabama A&M, where he was a member of the football and baseball programs in the mid-1960s.

As a member of the Alabama A&M football program, in 1966, Batts was part of hall of fame coach Louis Crews’ last team to finish the regular season undefeated, which also played in the program’s first bowl game — the Orange Blossom Classic in Miami.

In 1964, Batts was selected as the Alabama A&M football team’s Freshman of the Year.

During his Alabama A&M football career, Batts was one of the Bulldogs’ top receivers, finishing the undefeated 1966 season with 27 receptions while tying the Alabama A&M record for longest reception when he caught a 97-yard touchdown pass from Orlander Hale during a game against Fort Valley State.

Batts also was a member of the Alabama A&M baseball program from 1965-68, where he was a starting pitcher.

Dawson was a trailblazer for women in NCAA Division I athletics.

As a student at Lee High School in Huntsville, Ala. In the early 1970s, Dawson was tabbed as one of the city’s top basketball prospects, receiving offers from Tennessee State and Fisk University.

Dawson, however, decided to pass on the opportunities at Tennessee State and Fisk, opting to remain in her hometown and attend Alabama A&M.

There was one problem: At the time, Alabama A&M did not field a women’s basketball program.

That was not enough to stop Dawson.

Following her freshman year at Alabama A&M, Dawson did research on Title IX laws, and developed a plan to push the university into establishing a basketball program for female student-athletes.

After receiving more than 300 signatures on a petition, and meeting with Alabama A&M President Dr. Richard Morrison, Dawson helped assist Alabama A&M in establishing its first women’s basketball team in 1976, where it was sanctioned under the American Intercollegiate Association for Women.

Dawson was a member of the first Alabama A&M women’s basketball team, which was coached by hall of fame coach Betty Kelly-Austin.

After graduating from high school, Hervey, a Beaumont, Texas native, earned a scholarship with the Alabama A&M women’s volleyball program.

As both a coach and an administrator, Martin enjoyed a long and successful career in collegiate athletics.

Following a successful coaching career at Tuskegee, where he led the Golden Tigers to numerous baseball and football conference championships, Martin made the move to athletics administration, which in 1996 led to a return to his alma mater, where he was hired as Alabama A&M’s Director of Athletics.

During his 10-year tenure as Alabama A&M’s Director of Athletics, Martin led the Athletic Department through an era of growth and prosperity as AAMU made the transition to NCAA Division I membership.

By building a strong network of contacts, Martin was extremely successful in raising funds for Alabama A&M Athletics through sponsorships and promotions, which helped expand the resources available to the university’s student-athletes.

Martin founded the Athletics Community Support Group, which assisted fans to travel and cheer for the Bulldogs at events both on and away from campus.

While Alabama A&M was making the transition to NCAA Division I membership, Martin expanded the Athletic Department and its staff to meet the needs necessary to be competitive at a higher level. Martin implemented and staffed a full-time office for Academic Enhancement, a full-time Compliance Office, a Sports Medicine staff, CHAMPS and Life Skills.

Before returning to his alma mater as Director of Athletics, Martin enjoyed a very-successful collegiate coaching career.

After spending 13 seasons as an assistant football coach at Tuskegee, Martin was promoted to head coach, where he won two SIAC championships in 1987 and 1991. In 1998, Martin made the move to athletics administration when he was hired as Tuskegee’s Director of Athletics. Martin also served as an athletic director at South Carolina State and Long Island University before returning to Alabama A&M in 1996.

Robinson was a multi-sport student-athlete at Alabama A&M in the late 1960s who enjoyed success in football along with track and field.

As a football player at Alabama A&M, Robinson lettered four years from 1967-70 as a wide receiver for hall of fame coach Louis Crews.

During his collegiate football career, Robinson emerged as one of Alabama A&M’s top wide receivers, earning accolades from the Southern Intercollegiate Athletic Conference.

After finishing his Alabama A&M football career, in 1971, Robinson signed as a free agent with the NFL’s Atlanta Falcons.

Robinson has remained involved in athletics throughout his life, working as a high school basketball and track and field coach.

Rogers was a talented offensive lineman who starred for Alabama A&M from 1997-2000 before playing four NFL seasons.

Rogers signed with Alabama A&M in 1996 after graduating from Blount High School in Mobile, Ala. After receiving a redshirt in 1996, Rogers worked his way onto the field as a redshirt freshman in 1997, where he recorded 14 tackles, two tackles for loss and two sacks as a defensive end.

As a redshirt sophomore in 1998, Rogers made the move to the offensive line, where he became one of the top offensive tackles in the Southwestern Athletic Conference.

As a senior in 2000, Rogers anchored an offensive line that paved the way for an offense that averaged 333.3 yards per game. That season, he was selected as the team’s offensive MVP.

Rogers was a Black College Football All-America selection following his senior season in 2000, and ESPN NFL Draft analyst Mel Kiper ranked Rogers as the No. 18 Offensive Tackle heading into the 2001 NFL Draft.

Following his senior season at Alabama A&M, Rogers was a Blue-Grey All-Star selection (first in AAMU history) and he participated in the Senior Bowl (second in AAMU history). Rogers also was the first player in Alabama A&M history to receive an invitation to the NFL Combine.