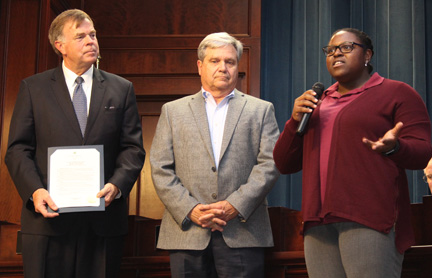 It's hard to imagine that some five years have passed since Xantheia Watkins conceptualized a class project that has become mainstay collaboration between Alabama A&M University and the City of Huntsville.

Back in 2014, Watkins' idea was fairly simple: to help promote Earth Day on The Hill, why not allow AAMU students to ride the city's shuttle buses without a charge.  Fewer cars would mean less gasoline consumption, greater familiarity with the shuttle system, and perhaps the development of eco-friendly routines.

The "Get on the Bus for Earth Day" initiative and Watkins's role in its growth on campus was recognized during the regularly scheduled meeting of the Huntsville City Council by Mayor Tommy Battle and Tommy Brown, director of transportation for the City of Huntsville.